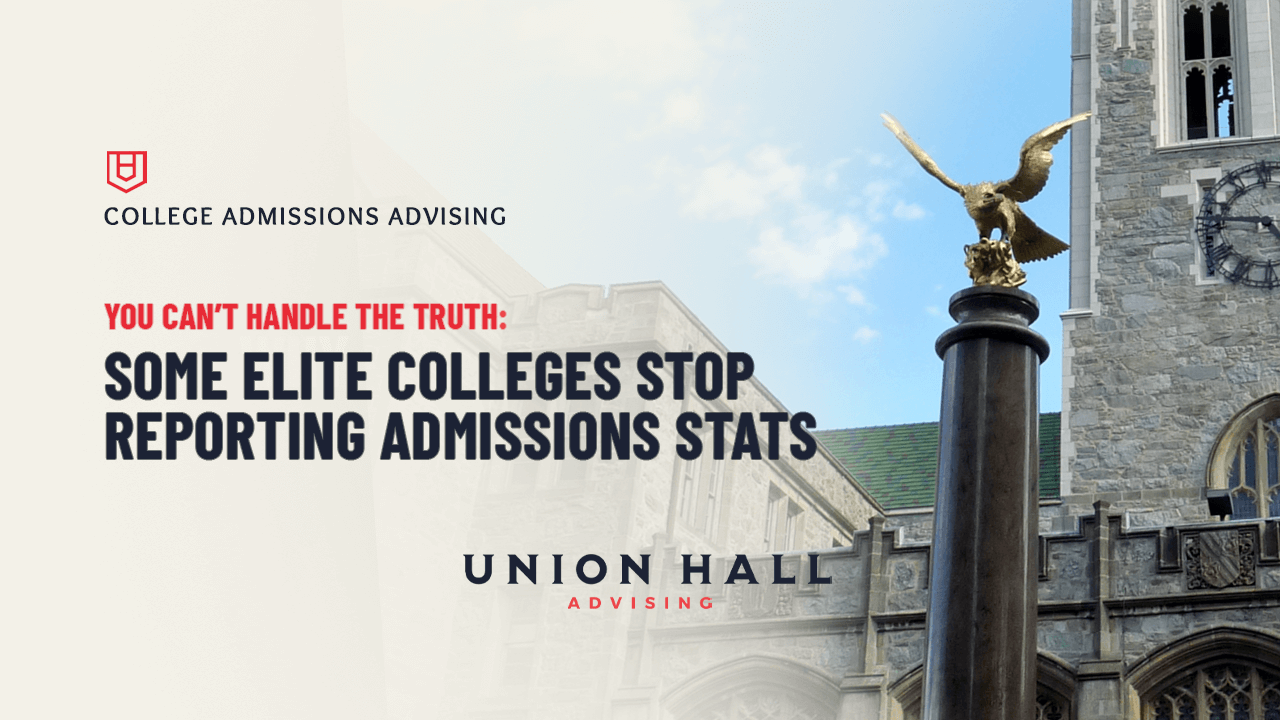 Last week, the Wall Street Journal reported that some highly selective colleges had decided not to formally release their most recent year’s admissions statistics. This includes schools like the University of Pennsylvania, Princeton, and Cornell, who will be joining schools like Stanford and the University of Chicago in not publicizing their very low admit rates. Either these schools are embracing the concept of modesty, or they are worried that minuscule admission rates will deter students from applying in the future. Perhaps they don’t want parents to question whether spending $80 on an application fee is a good idea when the chances of admission are just 3%. Whatever the reason, we think the decision strikes a condescending tone with students and parents. It says “we don’t think you can handle the truth, so we’re just going to obscure it.”

We think the decision strikes a condescending tone with students and parents.

Listening to the PR spin on the decision not to release admit rates is cringe-inducing. Penn’s Dean of Admission, E. Whitney Soule, told the Journal that “we're focusing not on how hard we are to get into, but on who these young people are that we chose.” That is sweet. We’re sure this is exactly the type of information future potential applicants need to make a decision on whether to apply to Penn or not.

The irony in it all is that Penn and others have increasingly sought out more and more applicants so that their admit rate does go lower. That’s right. Even the most prestigious colleges engage in the active recruitment of applicants. They buy lists and market to the students on them, sending out materials that excite prospective applicants (“Wow - The University of Chicago is interested in me?!”). They send an army of admissions officers out into the field to hold information sessions and visit top high schools. And they’ve spent big money building virtual engagement tools so that more and more students can experience their schools online. The company line is that recruiting efforts are more about finding underrepresented students. But we’ve seen the list buys these schools make and many are focused on broad demographic swaths that serve to garner more applications and make their schools more selective. If top schools really wanted to increase their admit rates to a level that they wouldn’t mind talking about, they could stop this marketing spend and live with fewer applicants. Or, as writer Jeffrey Selingo has pointed out in a few recent interviews, the schools could start expanding their class size. But they are not likely to do either. They’d rather beat their competition and gain as much prestige as possible, which is partly driven by low admit rates. Some thought that this behavior would stop in 2019 after U.S. News and World Report stopped using the admit rate in their rankings calculation. But it has not.

In the industry, some counselors have stopped calling this group of elite schools “highly selective” and instead have started referring to them as “highly rejective.” It’s a dig that resonates. But we don’t think there is anything necessarily wrong with pursuing application growth and wish colleges would just admit that they are indeed doing it. And, colleges, if you’re going to do it, don’t obscure the numbers (which eventually are reported to the Common Data Set anyway). The students applying can handle the truth.