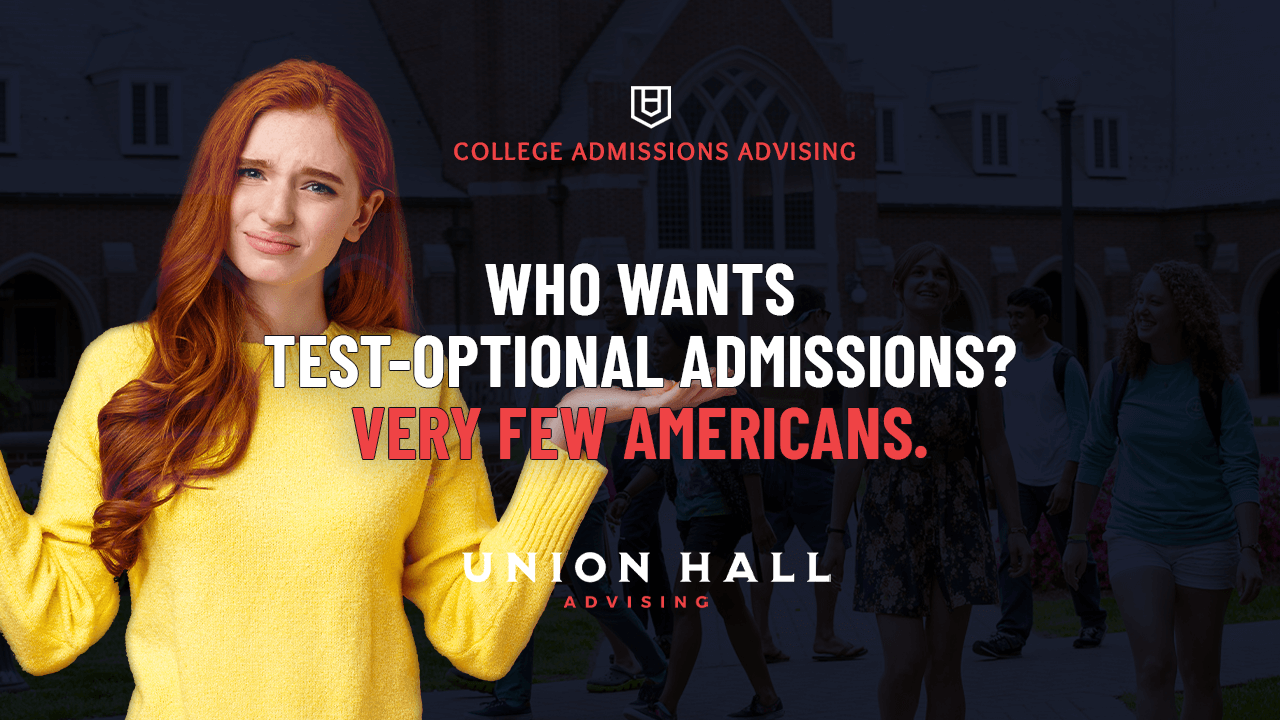 It seems that it’s hard to get Americans to agree on much these days.

But one thing they apparently agree on, according to the Pew Research Center, is that standardized test scores should be part of the college admissions process. In fact, 86% think they should be considered in admissions decisions (with 39% saying they should be a “major” factor). This might sound surprising given how many feel-good stories have been written about colleges doing away with testing requirements. And it contradicts the apparent belief of so many college admissions advisors and high school counselors, that have gleefully posted about the death of these tests.

So, why do a clear majority of people want to see standardized tests used in the admissions process? The Pew survey doesn’t say, but we have a few theories. One is that most people see the SAT and ACT as “fair” indicators of intellectual capability. They are, after all, standardized across high schools and very hard to cheat on. There are many who would dispute that the test is fair because well-off families can pay to have their kids coached to improve their scores. The SAT and ACT are indeed coachable, but so are most tests. Why don’t the standardized test haters also hate that many high school kids pay tutors to improve their coursework grades? If anything, typical improvements to SAT and ACT scores gained via coaching are relatively modest. PrepScholar, for example, advertises that they can get you an extra 150 points on the SAT and 4 points on the ACT - or a 10-20% bump. But the SAT’s free test prep through Khan Academy boasts nearly an identical average increase of 115 points (although some doubt the validity of this claim). We don’t think that the discrepancy between free and paid prep is good reason enough to throw out the tests.

Standardized test scores have given the colleges their own guide rails for admitting kids - and they still use them. Except when they don’t want to.

Another theory for why people value the use of standardized tests in the admissions process is that the scores provide a guide for where to apply. Given how many students have high GPAs (over 1.5M high school seniors have a 3.4 GPA or higher), the tests lend a metric that more precisely narrows the field (only 300,000 kids score in the top 10% of test-takers). We’ve said before that high schools tend to inflate GPAs to keep parents at bay. And for years the high schools have just let the colleges use the SAT and ACT to sort out all of those 4.0 students. That’s proven much harder in the years of test-optional admissions and has actually made it harder on the high school counselors to reliably direct their kids to “likely” and “target” schools. It’s harder still for parents to understand the unwritten rules of test-optional admissions. When parents ask us will it be OK if they apply test-optional, I explain that it depends (and that the answer is determined by their demographics and their high school’s level of competition).

Given that the vast majority of Americans believe in using the SAT and ACT to make admissions decisions, why have colleges resisted going back to requiring tests? In our view, it has nothing to do with equity. For years, standardized test scores have given the colleges their own guide rails for admitting kids - and they still use them. Except when they don’t want to. And this is the big difference between the pre and post-test-optional years. By not requiring test scores, colleges are giving themselves the license to accept high GPA kids that meet their other institutional priorities, without the burden of requiring scores or reducing their average test score ranges (which they still really want to keep high). However, most applicants still need test scores, especially if the college thinks you should have them based on your privileged demographic.

Notice that what colleges are not doing, is requiring scores but publicly admitting kids with a wide range of them. If you look at the middle 50% of scores last year at Columbia, for example, you’ll see that the 25%-75% range for the ACT is 34-35. That entire range falls in the 99% of ACT test-takers. But that doesn’t mean there are kids at Columbia who didn’t test much lower than this. Rather it means that many did not submit scores. Instead, colleges could require tests from everyone and still admit who they want. Their score ranges might not look as impressive, but they’d be more indicative of the scoring ability of the entire class and provide parents with greater guidance. But don’t expect them to do this, since it’s harder for students to file lawsuits alleging discrimination based on testing stats when testing stats are no longer required.