The Outsized Role of Calculus in College Admissions 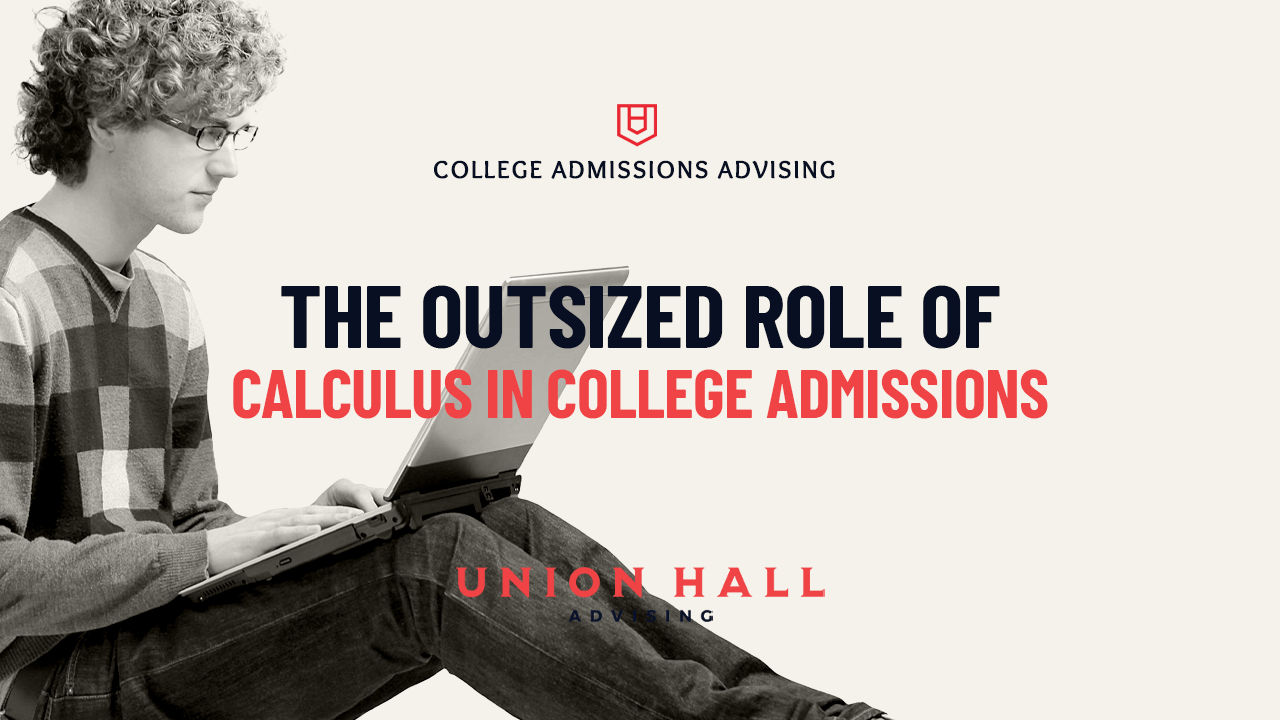 According to industry publication Inside Higher Education, a new report by Just Equations and the National Association of College Admissions Counseling (NACAC), says that Calculus is not the high school math class that most students need (they recommend Statistics instead). Yet, among those students who aspire to attend a highly selective college, most choose Calculus, even if they intend to study the humanities in college. Why is this? It’s because most informed parents and high school counselors have figured out that colleges use the presence of Calculus on a transcript as shorthand for a student having taken a rigorous curriculum. In many ways, it is admissions advising 101 to tell a student to shoot for AP Calc BC, or at least AP Calc AB. We tell most students the same thing, and we’ll continue to do so despite what this report says.

It's admissions advising 101 to tell a student to shoot for AP Calc BC, or at least AP Calc AB

Part of the reason that colleges rely so heavily on the presence of Calculus on a transcript is because it’s become increasingly harder for colleges to understand high school transcripts. They vary widely by school district and there is no standard curriculum even within the same state. So colleges look for sign-posts that indicate the upper-bounds of what a curriculum offers. At schools that offer AP Calculus, it is often the highest level of math taught (there may be Multivariate offered, but even fewer kids get to this level). When you’re reviewing an entire application in just seven minutes, you’ve got to find short cuts that universally indicate curriculum rigor and Calculus, even for future non-STEM majors is it.

But there are many problems with this. One that the report points out is that it leads to colleges not quite considering what is best for the student. But another is that it doesn’t take into account where a student began their high school math journey. If they are starting with Algebra 1 as a freshman, it is almost impossible to get to Calculus by Senior Year. At some private high schools, even kids taking Geometry as freshman can’t get all the way to Calculus. This penalizes potentially capable kids who just didn’t start on their advanced math track soon enough (which is in middle school). Finally, and maybe most damaging, is that many high schools don’t even offer Calculus, especially the ones in low-income areas. According to Paul Tough’s great book The InEquality Machine: How College Divides Us, 93% of kids attending Harvard in a recent year had taken Calculus in high school, yet just 48% of high schools even offered such a class. That is a disconnect that disadvantages students by the high school they’ve attended, something almost always outside of their control. But Tough goes even further when he highlights, at length, just how different the Calculus experiences are in high school depending on school. Private school kids are often taught Calculus in a rigorous manner, while those in even enlightened public schools have done so to “check the box” (as evidenced by schools moving kids into Calculus at earlier and earlier ages just to ensure that they do check that box). The result in college is a discrepancy in ability in the earliest college Calculus classes, which are often the gatekeepers to careers in STEM.

The report indicates that some colleges are moving away from the expectation of Calculus on the transcript, but that’s not going to stop us from recommending it. What colleges say publicly and do privately are often very different and for now, Calculus is still an indicator of general curriculum rigor, even if it is a flawed one.