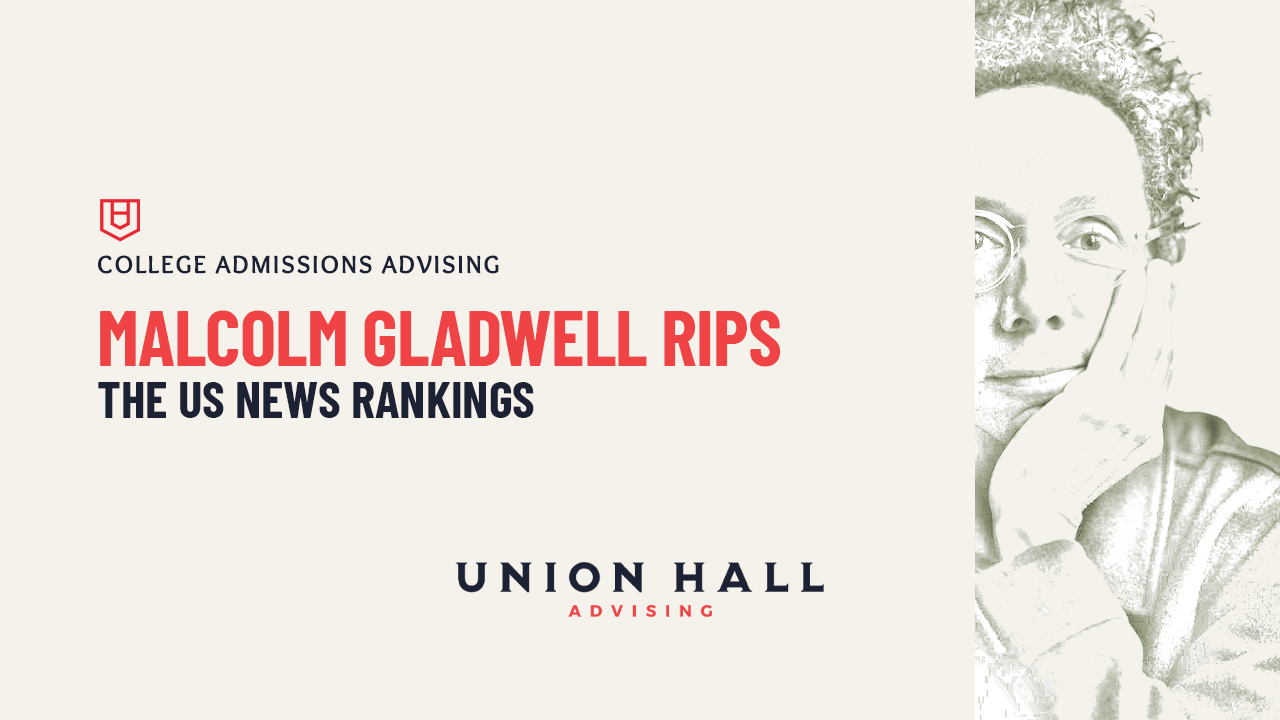 Let me start by saying that just about everyone here at Union Hall Advising really admires the work of Malcolm Gladwell. He has a knack for making complex theories easy to understand and is adept at summarizing the results of big data. If you have not read Outliers, or David and Goliath, you should pick up both immediately. We’ve also always appreciated how he’s had an eye for education and the role it plays in society. His lesson about being a big fish in a small pond when it comes to choosing a college is one we’ve told many students. So when we read that he was taking on US News and World Report’s College Rankings in his Revisionist History podcast, we couldn’t wait to listen.

Little did we know that we’d come away from the podcast wanting to defend US News and World Report. Not because the criticisms Gladwell levels aren’t valid - they are. But because they are obvious and the “gotcha” journalism comes off as a little cheap. The whole thing reminded us a bit of the way activist filmmaker Michael Moore harassed Charlton Heston at the end of the movie Bowling for Columbine. Picking on obvious flaws is not a great look.

Yes, US News is the keeper of the rankings and they’ve benefited financially from that position. And yes, there may be flaws to how the ranking is created. But well-meaning people have debated the merits of ranking systems for as long as they’ve existed. And although US News may have been the organization to capture the “Lord of the Ranking” moniker as his podcast title suggests, they didn’t create the voracious appetite for the rankings, nor are they the only ranking game in town. They simply tapped into the desire for parents and students to understand the relative value of a college education as expressed in terms of reputation. This isn’t a surprise given that a private education can cost upwards of $250K. Caring about the ROI of any one particular college degree may seem gauche to the intellectual elite (who get paid big $ to opine about academic pursuits), but the rankings are shorthand for a lot of people trying to make a decision about which college is worth paying for and which isn’t.

US News...didn’t create the voracious appetite for the rankings...they simply tapped into the desire for parents and students to understand the relative value of a college education

Other listeners may have come away with different key take-aways from the two-part podcast, but our two big ones were: 1) Gladwell takes issue with the “reputation” score of a college as determined by other higher education insiders, and 2) The rankings model can be manipulated greatly by tweaking just a few inputs. Let’s look at both:

Reputation Rankings Matter in the Model - But Are not Quite Valid

One of the “secret sauce” inputs to the US News Rankings is the reputation score that each college receives, as reported on by other academic insiders. Namely, the College Presidents, Provosts and Admissions Directors who all work in the field. US News sends them a survey every year and asks them to rank the quality of the other institutions in their competitive set. It’s akin to the Coach’s poll in college sports, where rankings in sports like college football can be hard to ascertain because not every team plays one another every year. It’s one of the hardest factors to game, since it requires changing the minds of your peers.

Gladwell makes the case that these insiders are not qualified to comment on the quality of the other colleges since they don’t have firsthand knowledge of the curriculums and teaching quality at those schools. This may be true, but it's hard to argue that insider opinions are worth nothing. Theoretically, college leaders are familiar with the broad happenings at schools they consider their peers. Gladwell goes to great lengths to poke fun at this concept, asking college leaders if they’ve ever even been to a college campus, let alone have the wherewithal to rate it. But would we dismiss McKinsey’s Global Managing Partner Bob Sternfels’ opinion of Bain Consulting, even if he’s never been consulted to by Bain? No, we’d probably agree he has some knowledge of his biggest competitors.

Gladwell also makes the case that the reputation score is circular in logic because the yearly ratings from the academic insiders is heavily influenced by US News’ previous years’ rankings. This struck us as potentially true, but also ironic. If the academic institutions roundly hate the US News rankings, why be influenced by them?

Part of Gladwell’s investigation into the US News Rankings led him to a few scholars who had successfully reverse engineered the model US News uses to rank its colleges. By mirroring the same inputs that the magazine uses to form its rankings, Gladwell could tweak the model himself. He does this in the second podcast for Dillard University, a historically black college in New Orleans. In short, by increasing the size of Dillard’s endowment, upping the standardized test scores of its students and vastly improving the student-teacher ratio, Gladwell is able to greatly improve Dillard’s ranking (theoretically moving it from the range of #171-#221 on US News’ liberal arts college list all the way up to #3).

This finding is a bit shocking at first glance, but perhaps it shouldn’t be. As Paul Tough pointed out in his great book, The Inequality Machine - How Colleges Divide Us (which we reviewed a few months ago), one thing that the top-ranked universities do is spend more per student than the tuition would indicate. Schools with large endowments can do this. And at least at some measure, the middle 50% standardized test scores do indicate a level of student quality, which is a key input into the overall college experience. (Even though we know that standardized tests are fraught with peril and the inequities for traditionally underserved ethnic and economic groups are real). And improving the measure of student-teacher ratio by a factor of 2X? Yes, we would argue that would greatly improve a school’s quality, too. But these were theoretical adjustments to a theoretical model made to prove a point - that the rankings are gameable with the right inputs. But, we’re not sure that needs to be proved, as ambitious schools like Tulane and Northeastern have for years been improving the inputs they know affect the rankings. Dilliard could do the same and probably see the same success.

Our issues with Gladwell’s analysis aside, we don’t disagree that the US News Rankings pose an issue for higher education. Despite the model’s flaws, their influence has not waned and led to a winner-take-all mindset among those parents seeking admission to the highest ranked colleges. We know, too, that Union Hall Advising benefits from this desire because what we do is help kids package themselves to stand out among many other candidates.

The good news is that Malcolm Gladwell, or any other person or organization is free to create their own ranking system. One that they deem more fair. If the outputs are solid, then we have no doubt that those results will eventually overtake US News’ Rankings. Remember that Google wasn’t the first major search engine - just the best, which is why it replaced Yahoo!. Until we have that new rankings system, I guess we’ll all just have to live with US News and the hatred it inspires.