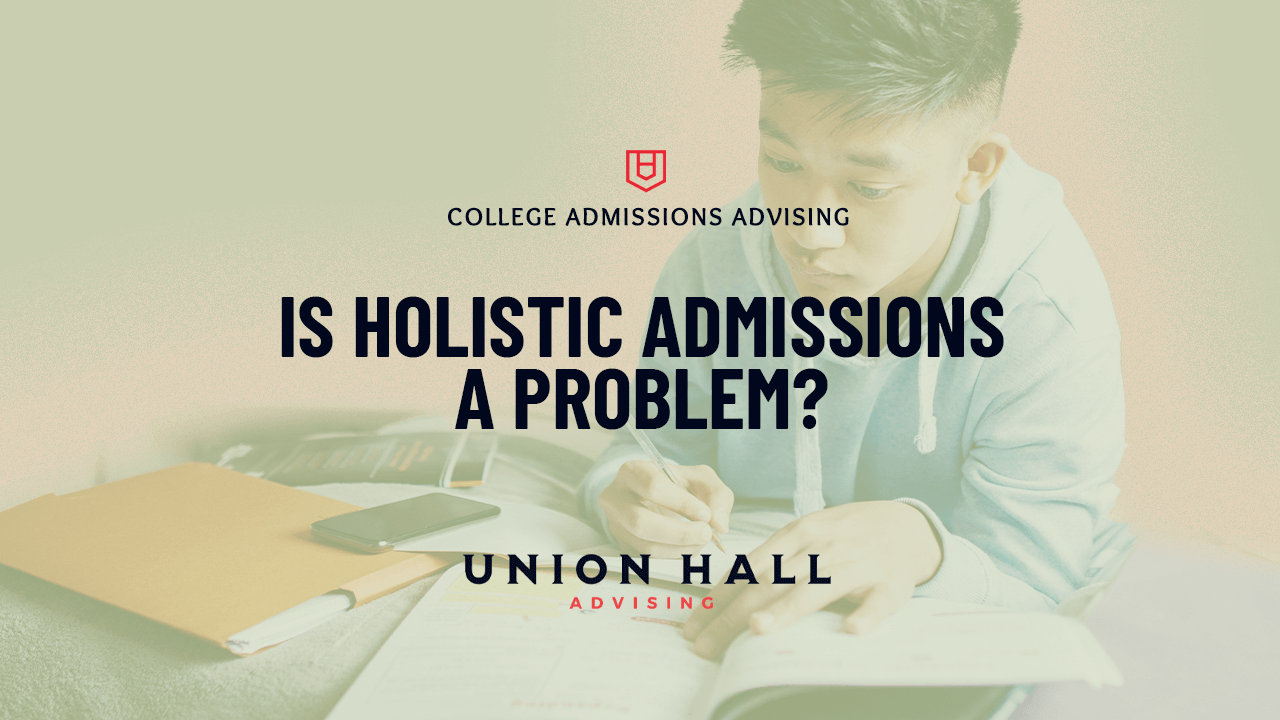 Back in February, the Wisconsin state legislature introduced a little-publicized bill that would require University of Wisconsin schools to publish the requirements needed for admission on their websites. The GOP-led effort was partly the result of frustration with what exactly it takes to get into any specific college. Of course, it might also have to do with getting around the practice of affirmative action in admissions. The committee said: “Decisions about who earns the privilege to attend a public university should be made in a fair and transparent manner.” Whatever the motives, it’s another attack on the concept of “holistic” admissions, which considers an applicant’s entire file and background, not just their academic record.

Colleges have long used holistic admissions to meet institutional priorities that extend beyond grades and scores. And this has often meant race and background. But even removing the use of holsitic admissions to increase diversity, there is a growing concern that the “holistic” part of the admissions process is eroding the baseline academic considerations. Part of this can be explained by the move to test-optional admissions, but we believe that another part is the growing uncertainty among applicants about whether they are a “fit” for a college. When even academically qualified applicants are being turned away from their own state colleges, it causes confusion and worry. And it also leads students to apply to even more colleges, jamming the system with applications and further reducing admit rates. At this point it is almost impossible to predict whether a student will get into a single college - and not just the highly selective schools - but even “target” and “likely” schools for many students.

In our view, the holistic approach might be a problem because of the way it is used to further an increase in “yield” at top colleges. Yield is the % of accepted students who elect to enroll in the school and it is a measure of the college’s desirability. It’s a vanity metric for many colleges and another way to keep their admission rates down. The greater the % of students who choose to accept a college’s offer, the fewer students they have to accept to fill their class. Harvard and Stanford each yield 4 students for every 5 that they offer acceptances to. That’s an 80% yield rate and is part of the reason they don’t have to accept a lot of kids. Syracuse University, conversely, needs to offer 6 students admission in order to gain 1. That’s a yield of 16% and contributes to a higher admit rate.

The emphasis on yield leads many colleges to use the holistic approach to gauge whether a student admitted will actually end up enrolling. Colleges love the ED round because they are certain of enrollment. But there is no such guarantee in the regular round and so when considering an applicant for admission, colleges often refer to the LTE factor (“Likely to Enroll”). Colleges consider LTE in a number of ways, but two questions that colleges ask themselves are: 1) Is this student overqualified for our school based on grades and scores? and 2) did this student demonstrate genuine interest in us before applying here? Both are reasonable holistic questions in gauging whether a student will attend. But when answers to these questions affect the admissions decision, it can lead to confusing results from students. Let’s take a look at each:

Is This Student Overqualified for Our School?

Seemingly every year there are kids with near perfect grades and test scores who are outright rejected from colleges whose average scores and grades present much lower. “How did a Florida resident not get into Florida State University with a 1580 and a 4.0 GPA?” The kids on Reddit call this “yield protection.” It’s when a college decides you are applying to their school as a safety and that you are likely to go elsewhere, so they don’t accept you. This is the college predicting what you want even though they don’t explicitly know and it can lead to confusion and the inability of students to feel confident in their safe choices. In fact, counselors have stopped using the term “safety school” because it hurts colleges’ feelings. Now they are called “likely” schools. Stories like this are why we ask kids to apply to multiple likely schools despite what their academics indicate.

Did This Student Demonstrate Enough Interest Prior to Applying?

Many colleges track a student’s interactions with the college prior to application. This is called “demonstrated interest” and to many colleges, it is more important than a student’s extracurriculars or essays. Colleges track your email open rate and how long you’ve spent on their web sites. They know if you’ve come to campus for a visit or not and whether you showed up to that online Q&A session you signed up for. Colleges make this a big part of their holistic admissions process, but again, they are doing so without knowing a student’s true intent.

Unfortunately, there is no easy answer to the problem of uncertainty in the college admissions process. And holistic admissions is still a better alternative to a lottery system, which would set an academic bar and then, by chance, award admission to a certain percentage of those students who meet it. So, we’ll just keep advising students to apply broadly, not just to reach schools, but to targets and even likely schools, too.