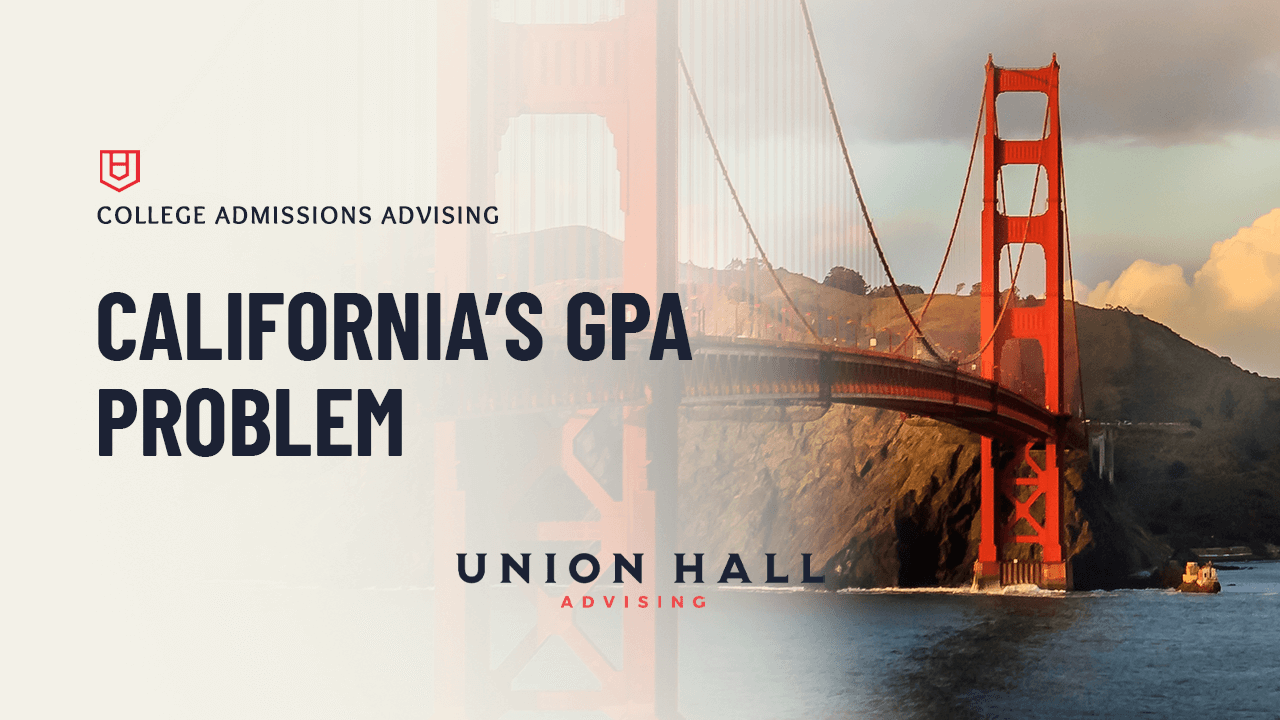 The ramifications of the University of California’s decision

to do away with standardized test scores as a criteria for admission have not yet been fully realized. We’ve just completed one year of test-blind admissions and so it is too early to say exactly how this decision will affect the nature of high school in California. But we do know that in the absence of testing, the GPA has become almost EVERYTHING in the admissions process.

This year’s stats are not out yet, but looking at the class of 2025, when test scores were merely optional (and not banned outright as they are now) the GPA stats were staggering. At UCLA, the median unweighted GPA of admitted students was a perfect 4.0. That means at least 50% of the kids accepted never got lower than an A in high school. No A minus grades and certainly no B’s. Even at the lowest 25% of admitted students, the average unweighted GPA was 3.94. UCLA and other California system schools also consider a student’s weighted GPA, and so AP’s drive this number even higher. At UCLA, the median weighted GPA was a 4.54. And we’re not just talking about the premier schools - other UC schools are difficult too. At UCSD the middle 50% weighted GPA was between 4.07 and 4.29.

The Median Unweighted GPA of admitted students at UCLA was a 4.0

This means that right now, to get into the top public university in California, students have to be near perfect throughout high school (A’s only) and likely, have done so in advanced classes. Is this supposed to reduce the pressure kids feel over their four years of high school? It won’t. If anything, the decision to do away with standardized testing and focus entirely on a student’s GPA is just going to further drive up the significance of being “perfect” in high school. The case against testing has always been that it shows just a sliver of your performance, whereas your GPA represents the work you’ve done over four years. This may be true, but now kids and their parents are going to realize that only perfection in high school can lead you to the best in-state university. We’ve started to see the link between teen depression and college admissions anxiety starting earlier and earlier. This will only exacerbate this problem for kids in California.

If you want to see a system that is already dealing with the unexpected consequences of making GPA the single predictor of college admissions, check out the University of Texas system. In 2009, the state of Texas decreed that any student who ranked in the top 10% of their class would gain automatic acceptance to the University of Texas at Austin (or any public school of the student’s choice). No SAT or ACT score required. That bar has since been raised to the top 6% for UT Austin. The idea was to give students from low-income neighborhoods the same contextual chance of making it into UT Austin or A&M as kids from wealthy neighborhoods, and in that respect it has worked. But if you advise students in Texas, you know just what a pressure-cooker high school has become if you want to attend the state’s top university. There, in an effort to make it to the top 6% of students, kids will do just about anything to improve their weighted GPA. These kids take AP courses they don’t care about and ignore unweighted classes that would help them in their lives because they can’t lose their ranking. We know kids in Texas who sign-up for after school classes online that will count toward their weighted GPA, keeping them in school all-day and into the evening. And we’ve even met those whose projects were sabotaged by other students because of the pressure to make sure that they remain above that 6%.

And like in Texas, California’s new policies will affect in-state students the most. Why? Because the UC schools rely on students outside of California to pay full tuition, and so if anybody is going to be accepted with less than perfect grades, it is going to be full-pay kids from out of state. In Texas, if you fall outside of the top 6% it is much harder to get into UT Austin for this very reason. If you want to attend UCLA as in-state student right now, with no special hooks, you almost certainly need a perfect 4.0.

We think that it won’t be long before the very counselors who were rejoicing about the SAT going away start complaining about just how impossible it is to get into the UC schools now. Parents are already complaining, which has led politicians to insist that more spots be opened up in the UC schools for in-state kids, which will ultimately result in fewer incoming dollars to the universities who’ve lost out on out-of-state kids. This is California’s new GPA problem.