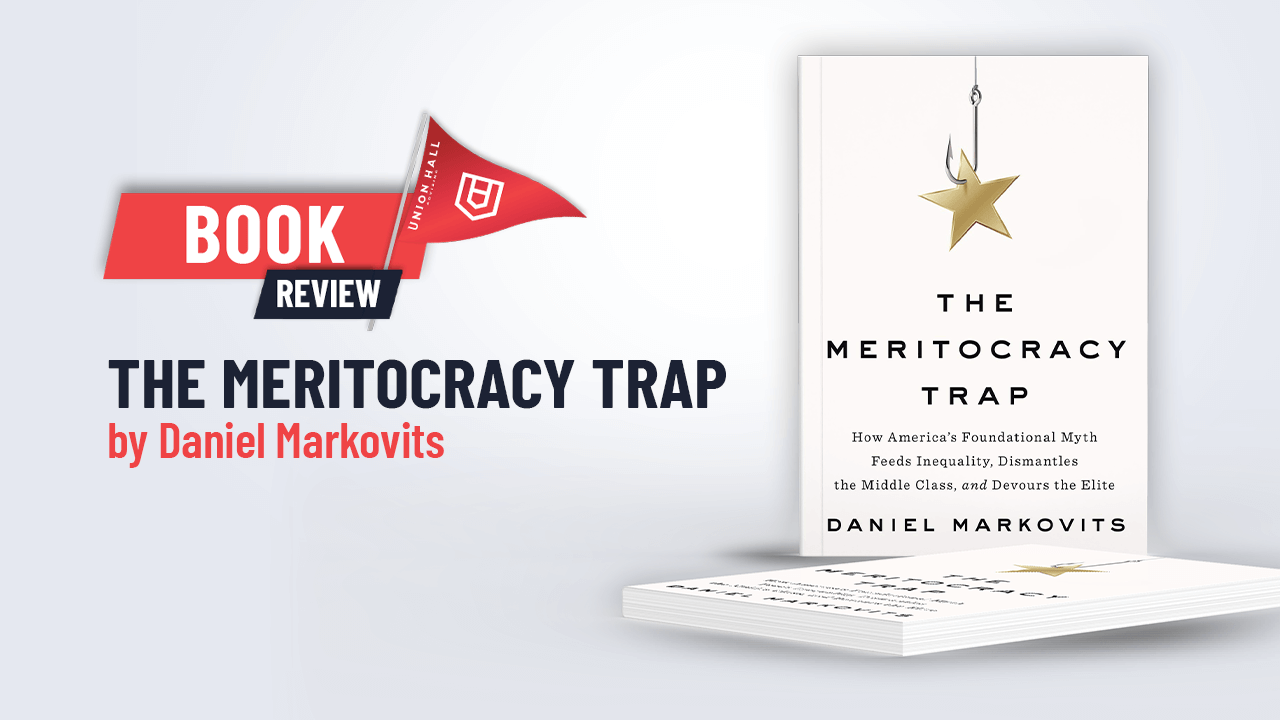 About six months ago, in a post we wrote about an article in The Atlantic, we referenced author Daniel Markovits and his concept of the “Meritocracy Trap”. Well, we finally got around to reading his incredibly important book of the same name: “The Meritocracy Trap - How America's Foundational Myth Feeds Inequality, Dismantles the Middle Class, and Devours the Elite.” Let us just say upfront that Professor Markovits (of Yale Law School) would certainly consider Union Hall Advising and other college admissions advisors part of the problem his title outlines. And he’s right - our entire business hinges on the desire of families to obtain “merit” by getting into highly selective colleges. But it doesn’t diminish our absolute respect for the clear-eyed picture he presents of the problems our society faces as a result of our dedication to meritocracy. It is a must-read.

Markovits explains that the modern world has fallen in love with the concept of “meritocracy” - which is that the smartest and most capable among us earn their success and related spoils by winning it. Compared to aristocracy, the previously dominant model for distributing wealth, meritocracy seems very appealing. Whereas money and status were once passed down by birthright, it is now awarded via perpetual competition among those that have prepared to compete for that economic and social power, with only the winners getting it. As Americans, our entire origin story is wrapped up in meritocracy and it’s easy to defend. But Markovits lays out an exhaustive case against meritocracy in its current form. Whereas it may have once been an effective model when people competed on a level playing field, that level field no longer exists. Now, existing elites behave similarly to the old aristocracy, but instead of passing down wealth and land, they pass on the knowledge and tools their children need to earn wealth and status in these perpetual competitions. These tools cost money that only the rich can afford (or even know about), tilting the game in favor of those whose parents have invested in them to be prepared. Those who can’t pay for those tools from an early age have no chance to really compete, which sullies the entire concept of “merit.”

Markovits presents examples of the divide between the elites and everyone else in this country, not just with regards to money but also life experience. And it is fascinating. But narrowing our thinking to the highly selective college admissions process, a few things stood out to us about the book:

1. Education at Elite Colleges IS the Primary Means for Obtaining “Glossy” Jobs

We’ve been saying forever that where you go to college matters, even if every high school guidance counselor in America wants to tell you otherwise. Like author Paul Tough before him, Markovits lays out in detail why this is: because the best companies with the highest paying and most interesting jobs want to hire the most “elite” people. And they, mistakenly or not, assume those people went to the most selective colleges. He explains that companies need fewer people these days because technology has replaced manpower. But you need smart people to build the systems that drive efficiency (which disintermediates the middle class). This is a central theme of the book. But purely within the context of college admissions, it makes perfect sense why more and more students want to obtain admission to an elite college. Regardless of the rest of your background, if you make it to an elite college, you’ll likely get to join the meritocracy. It is the number one feeder to wealth and status if you can make it.

2. In the Quest for Elite Education, Parents are Investing in their Children from Birth

We know that parents who are already in the elite realize that for their kids to obtain the same position, they have to earn it. You can’t hand down your Managing Director status at Morgan Stanley to your daughter. So these parents start working backward from that most critical inflection point - admission to a highly selective college, and start preparing their kids for that event. Markovits smartly points out just how much more money gets spent by elite parents in this process, than gets spent by middle and lower-class families. The elite can afford private school and tutors and enriching extracurriculars. All of that come to shape the candidates that elite colleges will choose amongst for admission. If no one has invested in you, the way these elite parents have invested in their own children, it’s virtually impossible to compete. And that hardly seems meritocratic. College admissions advising is one of the last stops in the process, but it is an industry almost entirely supported by parents angling for their children to land a spot at a top college.

3. You’ll Probably Hate the Meritocratic World Even if You’re at the Top

In a bid to get the elite to realize that they don’t really want the world they live in, Markovits makes it a point to expose just how brutal it is to be in constant competition with the rest of the elites. How more work is done by fewer people and how the people at the top, who dedicate their lives to the status and wealth such work brings, are actually miserable. I think everyone can attest to that at some level. In our world, we see it among the kids who are competing for spots at elite colleges. They have been groomed to compete from very young ages and they do: for grades, test scores, sports, meaningful work experience, and in many instances, even fitness and looks. So many of these kids have been bred solely for “success”, that, as Markovits points out, their entire personas have been dictated by what Ivy League admissions officers value. Are the kids competing for these spots happy? In many cases, they are not.

The one shortcoming of the book is that the author does not offer much in the way of solutions. This is understandable since the concept of meritocracy is so ingrained in our culture and often staunchly defended as “fair”. Maybe it will take someone else to lay out alternatives that seem viable to what meritocracy has become. In the meantime, you can expect even greater competition for the prize that many parents desire: an elite college education. As more student competitors enter the game the intensity of competition will increase, which is something we’ve all witnessed in college admissions over the past twenty years.